React For Beginners by Itera

Code is a subject to change. When changing, it's easy to forget update something related or break something else.

Writing tests, you will eventually use the code. If the code is hard to test - this is a spot that code will be hard to use.

Writing tests, you are thinking about edge cases - errors, fails and other crap happening in a real life.

Tests make you think more about your code.

Tests are crucial for the business because of Time to Market

Business want to deliver features as fast as possible, better - yesterday. Manual testing is slow. No testing is risky.

Unit tests - the most popular and the most fastest tests

Code for a unit test

Single component also a good candidate for the unit test

Integration tests exists to check, how does your components interact with each other.

Code for a integration testing

UI tests - usually tests some workflow, but in isolation from the real data.

Cypress, Playwright are good tools to help you with

End to End tests - most complex and time consuming testing

E2E tests that the whole application works as expected

End to end tests are most expensive and most useful

What should be tested

Right statement: You should test things crucial to the business

Before we go - good test consists of:

Update App.tsx with the next code

Update App.test.tsx with the next code

This is your first unit test

This unit tests checks existence of the text on the screen

Test failed because we did a typo in the component.

That is how the tests works.

Test which never fail is a bad test

This is how tests works - giving you hints!

How to test that callback was called 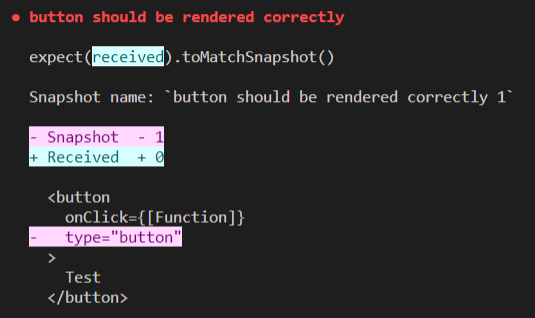 Don't forget to commit your snapshots!

How to tests that everything looks as should?

Wait, what if my component depends on other module?

Inversion of control - most preferable way

If tests are so cool, why nobody* wrights test?

Obviously, to write a test, you need some time. And in this moment, the new feature you just wrote, is waiting

Usual business don't want to wait till you write a test

Code is subject to change which means that tests are subject to update. Updating tests costs your time, and money for business

Tests are hard to write

Does this means that we are OK to skip tests?

It depends. If you are writing one-time script or a tiny obvious app - feel free to skip testing

If the app is subject to grow and requires maintenance, or it touches sensitive things like money or health - please test

You should always consider, what if something went wrong - network, user input, etc

Ideally you should have a one assert in the test. It's not something a must but having massive assertions will lead to harder maintenance

TDD - extreme programming paradigm when you write a test first

The cons - TDD is very slow